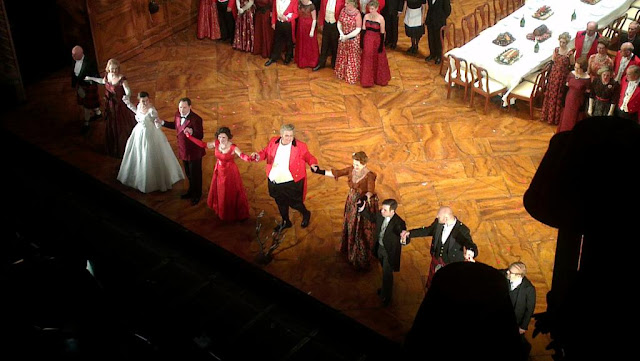 I had the privilege of attending a dress rehearsal at the Royal Opera House (ROH) of Robert Carsen’s Falstaff on Saturday [4thJuly] and I wanted to share some of my thoughts on the opera I saw in the format of a dress rehearsal. This is the second time I have seen a live performance of Verdi’s final opera (the first was with Fulham Opera). Falstaff is a detour from Verdi’s usual tragedy operas, being the second comedy opera he had written. Based on the original ideas from Shakespeare’s plays, The Merry Wives of Windsor and Henry IV, Verdi catapults Falstaff into opera with money troubles, questions over ‘honour’ and his love of food, booze and women. No surprises there.

Naturally this derives from Shakespeare’s original image of the clumsy knight, which has entreated theatre audiences worldwide, yet Verdi’s opera didn’t receive the same praise. Although the opera gained positive reviews at its premiere at La Scala in Milan (1893), many Verdi fans had reservations over the music, which, they felt, didn’t resonate with what they were used to. They wanted the big, bolder arias sung by tragic characters. Yet Falstaff is a thoroughly enjoyable opera not simply because it is a comedy that is centred on a character many are familiar with, but because its librettist, Arrigo Boito put together a clever story that gets an opera audience laughing from start to finish.

This is the second time Carsen’s opera is being shown at the Royal Opera House, since 2012, and from what I saw from the dress rehearsal, Carsen’s production depicts Verdi’s opera in an intriguing way through the Scottish highlands and post WWII inspired sets. This also includes gentlemen club reading rooms and Stepford Wives’ 1950’s kitchen heaven.  These clever set designs are creations of Paul Steinberg and are so bright you may require sunglasses, but I’m not complaining. Set in a mix of contemporary clothing, most of which are fancy, velvet and highbrow, with long pleated skirts and dinner jackets, there’s not a hint of a knight’s uniform anywhere.

Ambrogio Maestri was convincing as John Falstaff with his tall stature, jolly charisma and gigantic voice. He is witty as well as silly in the way he seduces the ladies, Alice and Meg. Alasdair Elliott, Lukas Jakobski and Peter Hoare are also funny add-ons as Bardolph, Pistol and Dr Caius.

This was spruced up by Mistress Quickly, which was sung by Agnes Zweirko who couldn’t get enough of flashing her chest at the dress rehearsal audience, with her clothes on! Come on people! Kai Rüütel and Ainhoa Arteta as Meg and Alice Ford were also perky on the stage with their bright yellow and passion red ‘50s get up. Some costumes they wore, designed by Brigitte Reiffenstuel, is the kind of couture I’d like to be seen wearing at a fancy party (but I hardly get the time to go to many of those.)

Anna Devin was a cutey pie as she sang as Nannetta with Luis Gomes as her secret lover, Fenton. They sing so sweetly together and the lighting powers of Carsen and Peter Van Preat only made you sicker of the heightened puppy love, only because it is extremely soppy. The entry of a special guest in Act 3, that is a horse is also added to great effect. He stands in his stable eating hay. Aww!

The Royal Opera Chorus didn’t fail to entertain either. They played a huge part in the dress rehearsal and they did exceptionally well, as did the ROH orchestra, dressed in jeans and casual tops. No judgement – it’s a rehearsal.  And I was totally impressed with conductor Michael Schønwandt who conducted without looking at the score; in fact he had his music score book closed for the most part.

Sat at the centre of the balcony were creatives with light on and paper and notes at hand. They whispered throughout the dress rehearsal while some sat behind the conductor’s head who also read their notes of the score as the opera was being performed. This could have been the director Carsen and revival director Christophe Gayral, but I can’t be sure, as it was rather dark.

The changing-of-scenes took a few seconds longer than a public showing would but because I knew that it wasn’t an real performance, I was able to detach myself from the usual things that would be a pet peeve to me if I was reviewing an actual show. Either way, there was nothing worth booing or hooting about at the rehearsal.

I have also attended the dress rehearsal of John Copley’s last showing of his production of La bohème this year, which premiered forty years ago. (It’s still showing now!) Often dress rehearsals are offered to audiences who want to get a glimpse of a production before they are ripe and ready for an public viewing, yet there are many pluses to seeing a dress rehearsal before they are beamed to the general public. It gives paying customers the ability to see how the creatives (stage crew, directors) and, most of all, it’s cast, musicians and singers work and operate when they are rehearsing.  I’d highly recommend people become a friend of an opera house, particularly here at the Convent Garden. I’ve learnt a lot through the two rehearsals I went to. The relaxed environment for its performers and flexibility for its production team to tweak and amend things last moment is an interesting insight. It also makes the dress rehearsal audience feel part of something that is still in the making.

Often the production knows that they won’t be held down by the scrutiny of the media during a rehearsal so they might only work as hard as they can get away with by rehearsal standards. For this reason I haven’t written anything specific about my opinion of the cast’s vocal skills, acting or the production’s stage direction. What I can admit is that I absolutely enjoyed Carsen’s production and encourage others to see it. If the dress rehearsal I saw was anything like this evening’s first night [Monday 6th July], then the production team should be proud. They must have done extremely well as they were awesome when I saw them.

Possibly the most appropriate occasion to call a production amazeballs. #ROHfalstaffEnjoyable and entertaining! pic.twitter.com/phghgW4nqi

I can guarantee no booing on opening night. Only loud applauses #RohFalstaff