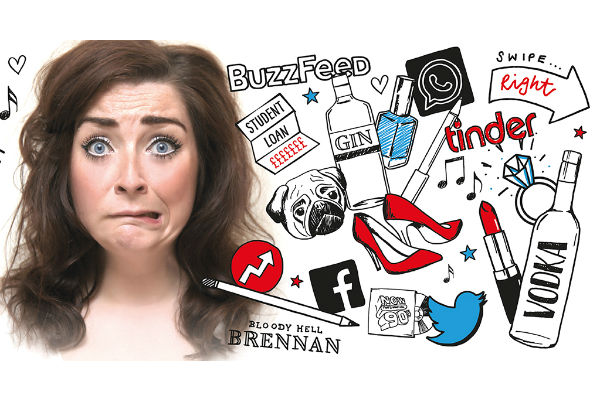 Jimmy Jewell and Stephen McGill present Katie Brennan’s Quarter-life Crisis at the Underbelly – George Square that has toured around the Fringe scene and settled in Edinburgh for the last three weeks. What’s a quarter-life crisis anyway? I had to think about it because I know what a mid-life crisis is. It means 25-years-old, right?

Being a twenty-something means (or meant) something different to everybody. For Katie Brennan, it’s everything from finding any job in the big city, impressing the boys in the bedroom, trying to not misbehave at your best friend’s wedding, (but failing badly,) keeping up with Carrie Bradshaw trends on a budget and dreaming to be whatever you wanted to be – that is if you have a clue of what that is exactly. Paying expensive rent or dealing with unexpected stains on your satin dress comes part and parcel for Katie unfortunately.

She sings great songs performed with pianist Joseph Atkins. Her vocals sound as if they had fallen out of a musical, and she is a joy to listen to. Atkins also composed the musical slash cabaret tunes with witty lines that literally shoot at you when you least expect them – he is brilliant on the keys. The gags and humour can be graphic and too-in-ya-face, but it’s ideal for an audience awake at 10.50pm with G & T to keep them warm, which Katie pulls out of her bra.

An evening with Katie will not disappoint. It’s full of laughs, and one to make you feel nostalgic about 90s pop songs including the likes of Spice Girls, Aqua, Britney, Vengaboys and much more, yet there’s also a touching source of hope and positivity to give the folks some life lessons. That includes killing our insecurities as if they were vampires and goblins and singing Doris Day’s Que Sara Sara, with the audience, to wash away the blues.

The show is going on until 29 August 2016 at the Underbelly – George Square. Click here to purchase tickets.