Could this be an insight into the future of where theatre and digital technology come together? The Royal Shakespeare Company’s (RSC) 2016 winter production of The Tempest has completely sold out, yet tickets to see the first glimpse of RSC’s collaboration with Intel and The Imaginarium Studios is still possible, however, as cinema audiences got to see the performance live from their local cinema last night. **

The merging of Shakespeare’s masterful play with the intelligent use of holograms and digital motion-capture technology has brought the wizardry and magical spells of Prospero’s island to life. It is an interesting time for the RSC as they welcome the return of Simon Russell Beale after twenty years absence and continue to take on new challenges, from broadcasting theatre live to several countries, including Russia and USA, and experimenting with digital enhancements. 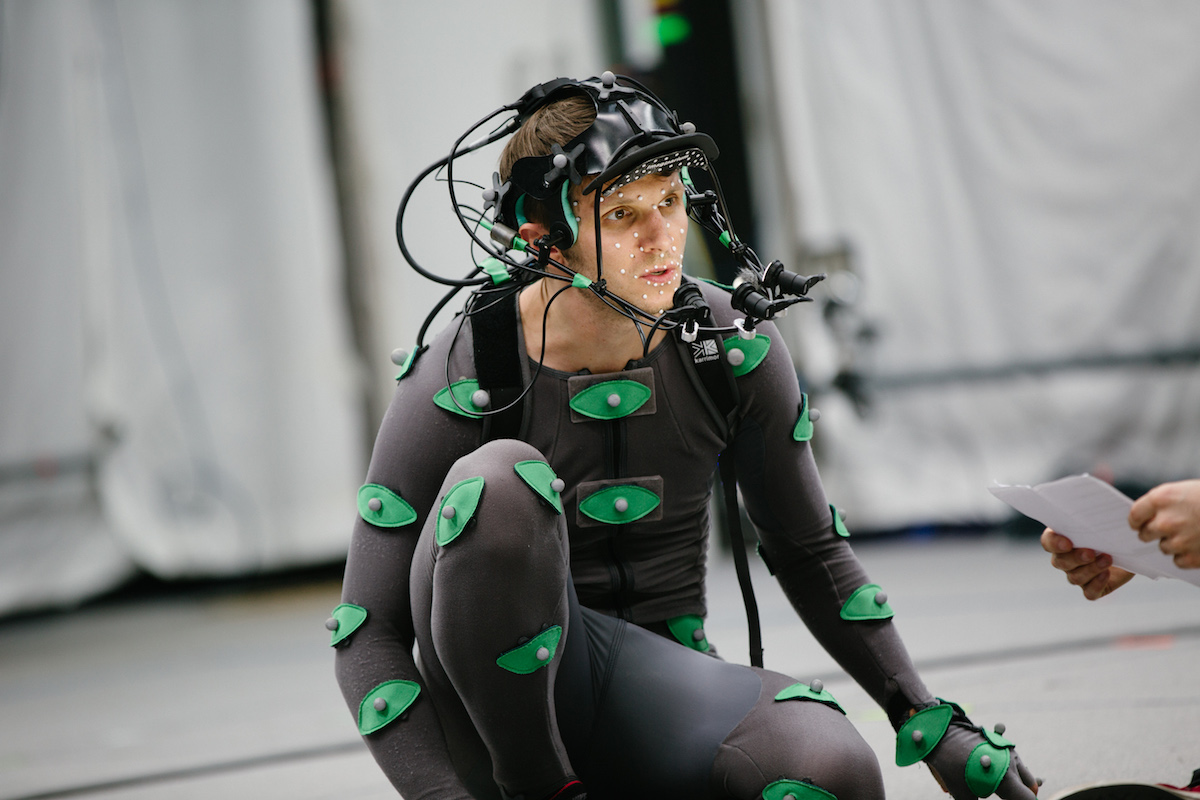 Exiled by the King of Naples, formerly the duke of milan, Prospero (Simon Russell Beale) and his daughter Miranda (Jenny Rainsford) were put to sea. After twelve years of ruling over a distant island, Prospero raises a storm seeking to avenge those that wronged him and shipwrecks them on his island. Using magical powers he orders and commands the island including two cohabitants; a monstrous cannibal and son of a witch called Caliban (Joe Dixon) and an invisible spirit named Ariel (Mark Quartley).

Quartley is lithe, agile and light on his feet as Ariel. In a skintight suit, it holds 16 motion sensors that require recalibrating five to six times before each show. The sensors wirelessly transfer data of his bodily coordinates creating an avatar that is projected onto the screens on the stage, yet he is not hidden backstage. Right on stage you can see Quartley on the left side as he speaks Shakespeare’s words alongside a 17-foot long digital spirit of Ariel in real-time motion.

Then we see something more interesting, in a later scene, where Ariel emulates the behaviour of a menacing winged monster with fiery wings and sharp bird feet, taunting Prospero’s enemies. Visible to everyone’s eyes is Quartley, again, speaking Shakespearean language, yet when he hoovers and crouches down the large winged creature moves with him, accentuating its horrifying and frightening nature. The monstrous avatar traces the movements of Quartley’s face and upper body while visual technology does the rest. It’s a revolutionary move which proves how visual effects can work in tandem with classical theatrical works that need not be pre-recorded.

With these revolutionary tools, though, is the next question: does these unique enhancements detract the audience away from the theatrical meat of Shakespeare’s narrative? The simple answer is no. The brilliant cast at Stratford-Upon-Avon perform with vigour and zeal.

James Tucker as the King of Naples was a convincing lost father, weeping for his son, Ferdinand who is bashfully performed by Daniel Easton, seeming to please both Prospero and Miranda. Jenny Rainsford, as Miranda, doesn’t take him for a fool but bluntly asks him to marry her. Rainsford’s Miranda is strong-minded, yet equally a vulnerable daughter to the former duke of milan.

Simon Russell Beale explained in an interview, before the show went live, that he understood the complexities and intricacies of Prospero’s syntax and eloquent speech. During the performance, Beale seemed to pause before speaking, perhaps needing more time to remember his lines or deliberately holding back for dramatic effect, yet for whatever the reason, these observations are thwarted by his impenetrable and engaging portrayal of a vengeful duke.

The sub-plot surrounding Caliban’s plot to usurp Prospero is a comedic adventure that had many audience members giggling endlessly last night. Tony Jayawardena’s ethnic background is heard in his voice and it adds an authentic add-on to his take of the drunken butler Stephano who is sprung further a field with the clown-like tomfoolery of Trinculo. He is performed with limitless energy by Simon Trinder. 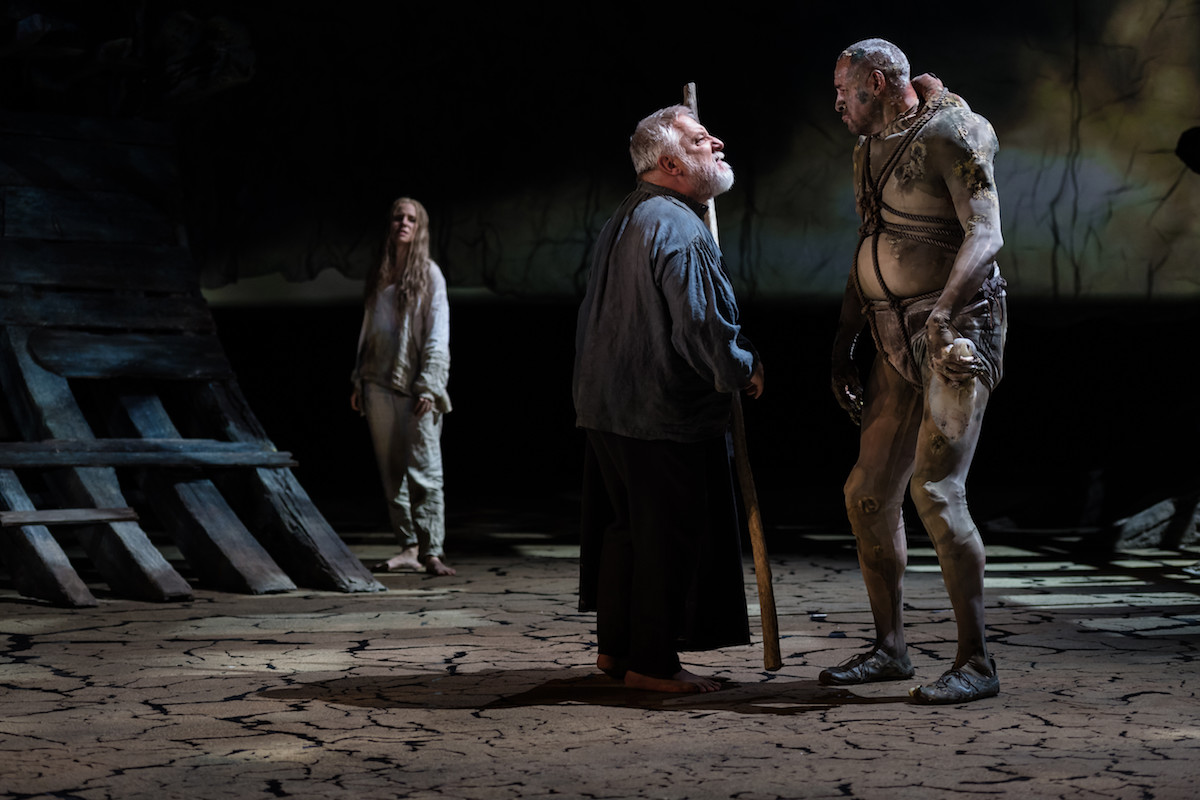 There’s also Joe Dixon’s Caliban, the anti-hero who stresses the oppression from Propero which ends when Prospero releases him from his cell. Dixon’s plays Caliban with moments of sadness and pathos, carrying a pop-belly and protruding spine. Yet, the one that shall be remembered for The Tempest -undoubtedly – is Mark Quartley with his gentle wanderings and contant presence as the imprisoned spirit. Singing and shaping Shakespearean language whilst manipulating avatars wirelessly is no easy feat yet Quartly makes it seem effortless and refined.

Massive kudos goes to sopranos Jennifer Witton and Samantha Hay who sing delightfully as Juno and Ceres to celebrate the marriage between Miranda and Ferdinand. And credit is due to Finn Ross, Simon Spencer and Stephen Brimson Lewis for producing an amazing stage filled with visual colour and powerful hues of this spell-binding island. Gregory Doran’s has directed yet another fabulous production at the RSC, which I’m inclined to see again live at The Barbican this summer as the RSC go on tour.

The RSC are touring this year. They are in London, performing at The Barbican, this summer (June 30 – August 18 2017). Click here to purchase tickets now.